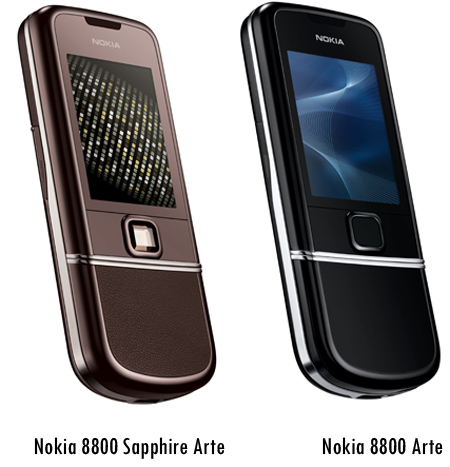 These phones have a sophisticated design which allows the user to tap the surface just below the display to see an analog clock that indicates the time.

Both the Nokia 8800 Arte and Nokia 800 Sapphire Arte handsets boast high-end metal and glass composition. This gives the phones their classic and iconic style along with a smooth slide mechanism that comprises state-of-the-art ball bearings and a unique spring mechanism.

Nokia 8800 Arte sports ‘turn-to-mute function to silence the incoming call that enables the user to quiet the phone inconspicuously by just turning over the phone, screen-side down.

In fact, the Nokia 8800 Sapphire Arte in particular is housed in a polished steel case that sports a genuine sapphire gemstone and an accent of soft leather that offers users a rich feel.

More important features of the Nokia 8800 Arte and Nokia 8800 Sapphire Arte phones include:

Each of the Nokia devices also allows the user to enjoy an exclusive video-track and soundtrack composed by Kruder&Dorfmeister with visuals by Fritz Fitzke.