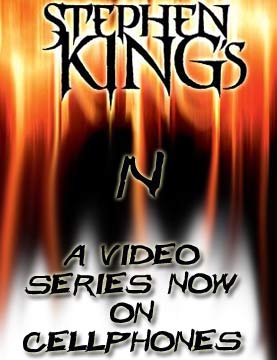 “N”, the short story of Stephen King which was not published earlier will be arriving on cellphones soon as a 25 series video episode through a distinct partnership between Scribner and Simon & Schuster Digital, Marvel Entertainment, and CBS Mobile. Revolving around a psychiatrist who becomes the victim of the same mysterious and deadly obsession as his patient, the series is sure to excite Stephen King followers or just about anyone who fancies a well above average frightening story.

Stephen King, said, “I’m always interested in new delivery systems for stories and always curious about how those systems work with the old storytelling verities. This one, it seems to me, works extraordinarily well.”

“ ‘N’ combines-cutting edge graphic content with the hot new digital medium for entertainment to showcase Stephen King’s unique talent, and we think consumers will be excited to try this never before attempted way of previewing his upcoming story collection. We are grateful to CBS Mobile and Marvel Entertainment for partnering with us to bring this wonderful Stephen King story to mobile customers and online consumers.” remarked Carolyn Reidy, President and CEO of Simon & Schuster, Inc.

Considered to be the premier comic style book adaptation and crafted explicitly for small screens on the cellphones, the primary series comprises of an ingenious musical score with an entire cast of voice overs that consists of Ben Shenkman, an Emmy and Golden Globe nominee. With a creative inspection by Stephen King and adapted from the short story by Marc Guggenheim, coloring and artwork of the series is done by Jose Villarrubia and Alex Maleev respectively.

At no additional charges to mobile users, the video series each two minutes approximately, will be released on consecutive weekdays for five weeks starting July 28, 2008 through the largest mobile carriers.

It can additionally be obtained on the web through the CBS Audience Network reaching 92% of the US-based online audience and consisting of online partners such as TV.com, AOL, Microsoft, Yahoo, Fancast, Joost, Bebo, Netvibes, Sling Media, and Veoh as well as Web sites from CBS’s owned television, radio, and affiliated stations and at the NisHere website.

The series is also available for download for paid customers with blocks of 5 episodes at $0.99 or a season pass of the entire series for $3.99.