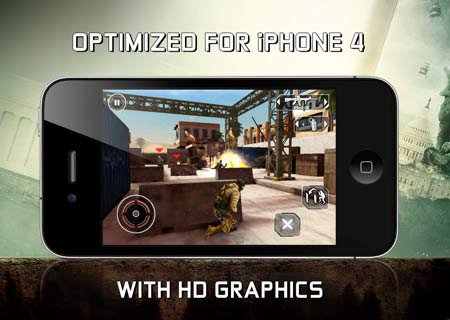 Here’s a game that seems to be inspired by a Hollywood action film, wherein the hero fights against a fraudulent secret agency to get his daughter back home. The Splinter Cell Conviction offers an enticing and immersive game which is based on the above story. GameLoft, the creator of the game has recently updated it to the 1.0.2 version. This version now renders support to the iPhone 4 operating on iOS 4.

The new upgrade adds enhanced graphics leveraging on the latest iPhone 4’s novel Retina display. Gamers may now also use the multitasking functionality with the game and toggle between apps. The latest iPhone upgrade is all set to now offer users a seamless gaming experience with augmented 3D graphics taking advantage of the Apple handset’s innovative designs.

Splinter Cell Conviction is wrapped around Sam Fisher who is a Special Forces officer. Sam is out to get back his daughter by eliminating a corrupt secret agency. In this game, players will have to form excellent strategies and covertly follow a trail leading from Iraq to DC. With a variety of ammunition ranging from AK47, pistols, shotgun, handgun, bazooka, to sonar goggles and camera grenades, gamers can to eliminate their adversaries.

Packed in with 11 levels located in eight destinations from the White House to Malta, the game also offers a level situated on the banks of the Potomac River exclusively for iPhone owners. Gamers in the shoes of Sam will even get to experience one of those dramatic action-fuelled ‘rail-shooting sequence on a speeding boat’. A few other interesting and supportive features included are firstly the Mark & Execute function which enables players to mark multiple targets concurrently and blow them off. Secondly, the Last Known Position feature helps gamers outflank and kill their foes, as it shows them where the enemies anticipate their position.

The latest version of Splinter Cell Conviction is available for $6.99 from the iTunes store.