Let’s admit it – India has yet to open up completely to 3D content. More recently we’ve seen a host of manufacturers ranting about the wide and enhanced display abilities of their products in this respect. So when someone says they’re bringing 3D to something as diminutive as a mobile phone, it’s only duty-bound to grab attention. And to come from a low-cost handset maker like Spice, cropping questions shouldn’t surprise anyone in particular. Nevertheless, the company’s venture into 3D technology, the Spice M-67 3D dual-SIM phone convinced us enough to bring it under our wings for a review. We couldn’t have missed glasses-free 3D on a mobile phone, could we? 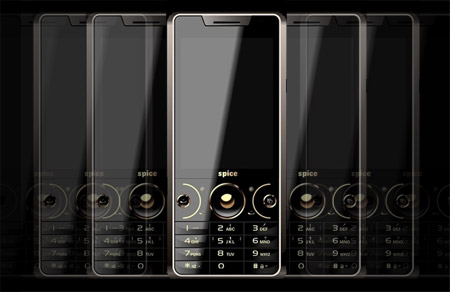 The handset stood out in the box thanks to the sheen factor added to it. Looking past, other contents in the package that caught our eye included user documentation, a charger and pair of earphones. The phone appeared too in-your-face for our liking. It’s painted in gold and black all through the front and looks no more than a flashy piece of tech at first glimpse. What’s more, the phone bears a rather flat profile which isn’t impressive to say the least. The implanted buttons are in the same length as the rest of the phone’s chassis. If there was anything about the build quality that had us smiling, it was the rubberized matte texture on the façade. It’s almost taken away though by the rest of the body that’s a glazed black.

The Spice M-67 3D is a dual-SIM phone and you won’t struggle to find that bit. Right below the 2.4” screen are keys that are arranged in accordance to the handset’s dual SIM abilities. The middle terrain is occupied by a circular button, slightly raised in comparison to the other keys for OK. A semi-circular ring in gold for yours truly distinguishes the left and right area keys. Spice innovates by giving the dual-SIM abilities a distinct ‘Master’ and ‘Slave’ theme with keys helping identify functions appropriately. A shortcut to the slave SIM attributes appears on the left key. A mirror one on the right is a hotkey for the Play mode. The Select/End, Master SIM and Call end buttons are placed sideways. The left edge of the handset includes a USB port covered by a rubberized door while the left border houses just the 2.5mm headphone port. A camera lens accompanied by the speaker grille is on the backside.

We’re welcomed by the now routine Java interface seen on low-cost handsets. Not to mention that getting our SIM cards in the phone was another thing altogether. But the simple and organized interface that rolled out the red carpet for things to come in this phone had us forget our grouses for sure. Among the very basic functions included in the phone, the Contacts attribute has Batch Operations which did manage group tasks differently though well. Messaging has a different story to tell. The included keypad is on the fence of being ok-ish to bad. A word of caution – the less time you spend with it, the more you’re going to like it. It wasn’t really comfortable courtesy of the hard presses required by the keys. If you leave aside the keypad and move to the interface, the messaging experience is far better. A Text Format feature spruces things up – it allows messages to be formatted in Bold, Italic, Center Align and new paragraph align. For some reason, we couldn’t see the Sent items option in here. 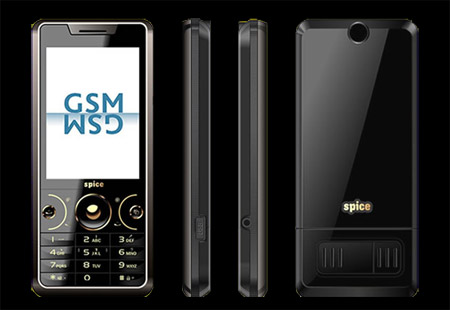 The Spice M-67 3D coughs up decent call quality while putting up missed, dialed and received calls in neat tabs. As you navigate through the phone, you’ll see another handy utility. The options button for almost every function throws up a list of things that can be done and you don’t need to span the entire list to reach to a desired option. Just hit the corresponding number on the keypad. There’s nothing really to write home about the time we spent on the web with this phone. First off, getting the handset hooked up to the internet had us at our wits ends. In fact we’ve seen this in a host of low-cost handsets by now which offer dinky web navigation more than anything else. Getting our browser connected was a painful process; add to this the hurtful fact of having no Wi-Fi support onboard. Applications wrapped into this phone include the likes of Facebook, Wapedia, Nimbuzz and Cricket Update with Spice adding its own ‘Spice Gang’ feature too.

The M-67 3D phone boasts of about 500K of internal memory and our review unit in particular trotted in minus any memory card. Should this interest you, there’s a microSD slot that can accommodate about 16GB of memory. The phone was plugged to our laptop through the Mass storage mode and it was smooth sailing all along. When we connected our phone, we noticed two more options – COM port and webcam. It was the 2MP camera that went under the routine scanner next which sadly didn’t manage to hold our attention for more than a few minutes. Even with Spice trying to wax eloquent about this attribute (at least the wide features revealed by the interface suggest so), the image and video quality of things being captured is forgettable. A complete audio player if we may mention does appear to make up for all that the camera misses out – high standards. The best part is that contrary to many low-value phones, the sound being belted out is pleasing and not too stannic even at the highest volume levels. An added perk for ardent music lovers is the inclusion of FM Radio which besides proffering access to on-air music stations also permits scheduling and recording through the radio.

We can’t really say if we’ve saved the ‘best for the last’, but yes 3D is clearly supposed to be the highlight of this phone. It’s specifically a dose of stereoscopic 3D. When in this feature, you’re given the option of 2D and 3D modes for both videos and images. Alas, the Spice M-67 3D phone scores rather low on this front. First getting content in 3D to work is agonizing and even when you do manage to get everything in place the poor quality being rendered makes it disappointing. On a practical note, it would be a blunder to imagine the phone offering 3D support given its mere 240 x 320 resolution display. Almost like adding insult to injury, the handset wasn’t too upfront about recognizing data straight from the memory card too. It didn’t take much to move on. We checked the tweaks we could conduct and support for Hindi language cropped up as a standout. The Remote Wipe settings intrigued us too. Spice throws in two games – Magic Sushi and Puzzle as well. Upon moderate usage the phone survived just about a day on a single charge.

The included Remote Wipe attribute is an interesting addition.

3D support is limited and doesn’t serve any particular purpose.

Our web-browsing experience was definitely disappointing.

With almost every manufacturer stepping into the 3D terrain, let’s say phones are best saved for the regular calling and texting features. It does make sense to offer specific attributes that are good at a few things rather than trying to make a hullaballoo about nothing. Sadly, this is precisely what our experience with M-67 3D turned out to be. It’s a primitive dual-SIM handset that just happens to have a 3D stamp on. The Spice M-67 3D phone does win points for being rather affordable at a mere Rs. 4,299. We’re giving the handset 6 out of 10.