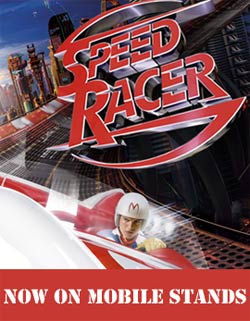 Become a Grand Prix champion with you mobile phone pumping an adrenaline rush through your senses. The Speed Racer uses the Car-Fu technique which is an artful driving skill and sense of oneness with the vehicle. The game involves drifting, sliding, jumping, and driving defensively which allows players to navigate extreme tracks and fierce competitors and obstacles. The fast and fierce game launches itself with 3 modes and the tracks keep unlocking themselves after each story is completed.

“The team at Glu has done a remarkable job of delivering all the fast action of SPEED RACER onto the mobile phone,” said Anthony Campagna, director of wireless sales development, Warner Bros. Digital Distribution. “This game provides hours of entertainment and will make a great companion piece for anyone passionate about SPEED RACER.”

Speed Racer also displays amazing graphics and 3D graphics with a choice of six different vehicles to get the best driving experience. The movie will go on air in the US movie theatres by May 9th, but the game has already arrived on mobile screens through wireless carriers in Europe, North and Latin America and will feature in other parts of the continents very soon.