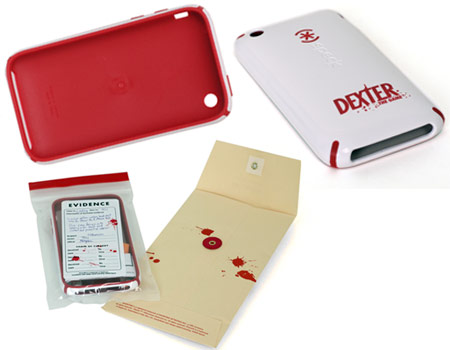 Speck will soon launch Dexter themed iPhone case. It looks attractive as well as appealing and comes enclosed in an “evidence” envelope.

Based on the popular TV series, this yet to release videogame for the iPhone is developed by the Icarus Studio. It is an investigating, mystery and problem solving game based on the popular Dexter show. The show is a dark thriller about the life of a serial killer and scientist Dexter. The protagonist works as a forensic blood spatter analyst for the Miami Police Department and rightly penalizes the deserving wrongdoers.

In this game, the players will have to indulge in a lot of headwork, analyze and collect apt evidences to move ahead in the journey. Moreover, these interesting themed Dexter cases will add more zeal to the game.

Apparently, Speck is expected to release the Dexter game for the iPhone and the themed case in the summer of 2009.