If you’d call the ability to hear Wi-Fi signals a superpower, then Phantom Terrains is a new software enabling the deaf to do just so. This marvel has been developed by Frank Swain (a distinguished science writer who has been losing his hearing since his 20s) along with Daniel Jones, artist and software engineer.

Phantom Terrains makes Wi-Fi audible by streaming the signals to a pair of hearing aids. Everything from data rates to encryption modes to network identifiers take form within sonic parameters and can be recognized by their unique signatures. The creators feel that augmented reality need not be restricted to sight alone anymore. 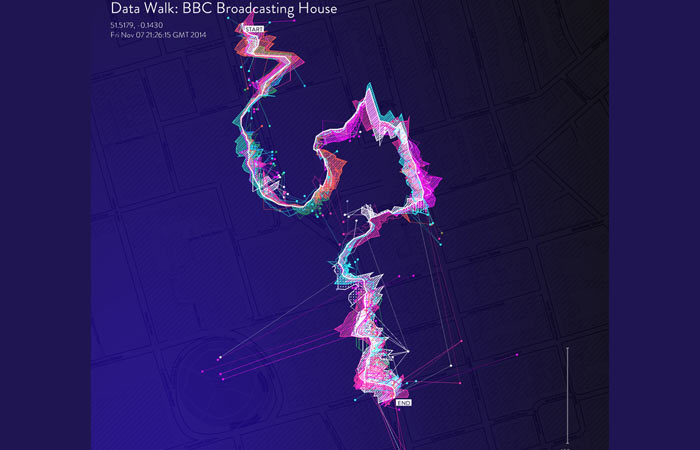 Their software transforms hearing aids into something other than a prosthetic, making it an enhancement which does what the human ears can’t. Imagine being attuned to all the beeps and clicks coming from wireless routers around you which sing at a different pitch depending on the signal strength. It’s bound to drive anyone insane, right?

The problem with any pair of hearing aids currently available in the market is that it amplifies certain kinds of sounds and blocks out others which it sees as irrelevant to the person using it. Swain and Jones choose to rebel against this limitation by adding software-enabled audible Wi-Fi signals to the usual sound-scape.

One of Swain’s test runs involved him walking around the BBC Broadcasting House with his system consisting of a hacked iPhone’s Wi-Fi sensor and a pair of Bluetooth-connected Halo hearing aids supported by the Phantom Terrains software platform. What you see above is a visualization of the area’s wireless network landscape.

It’s difficult to tell when Phantom Terrains will make it into mainstream use since the software is still at an experimental stage. But there’s no doubt that hearing Wi-Fi signals is not a superpower people would refuse, deaf or not.