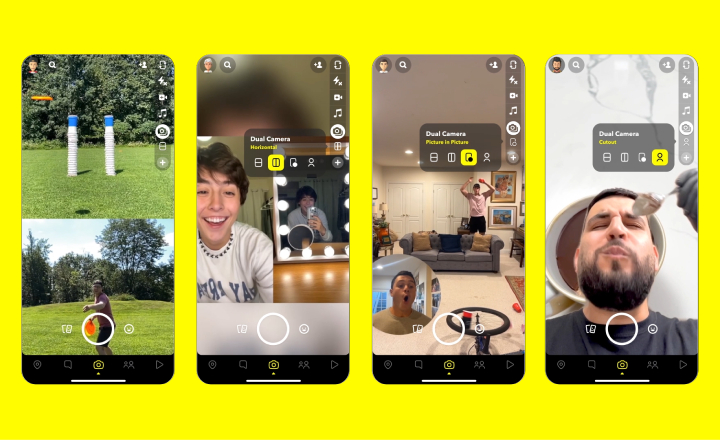 BeReal is the new app in town that’s quietly growing in popularity and the effects of that are now visible on Snapchat. The latter has been granted a dual camera mode similar to that of BeReal, allowing users to record with both the rear and front cameras simultaneously.

Of course, Snapchat’s version of this feature is much more feature-rich, given the number of unique tools the app already has. And it’s only available on the iOS version for now, with the Android version scheduled to get it in the coming months.

Users will now see a new icon in the camera toolbar that they can tap to access the dual camera trait. It supports a total of four layouts in the form of vertical, horizontal, picture-in-picture, and cutout. A number of Snapchat’s creative tools can be used in these clips, including music, stickers and lenses.

Using both cameras to record short clips is an idea that’s at the core of what the BeReal app is all about. The concept of this platform was born out of angst against the curated, oftentimes faked, nature of the content that’s mostly posted on Instagram and Snapchat.

The name BeReal refers to a notification randomly sent to users anytime during the day. This is to inform them to be real and capture anything that you’re doing at that very moment without making it look presentable. And this is done using photos captured via the front and rear cameras simultaneously.

As irony would have it, both Instagram and Snapchat have now started espousing this concept. Earlier this month, Instagram started testing something called the IG Candid Challenges, which ask users to post once a day when prompted by a notification.