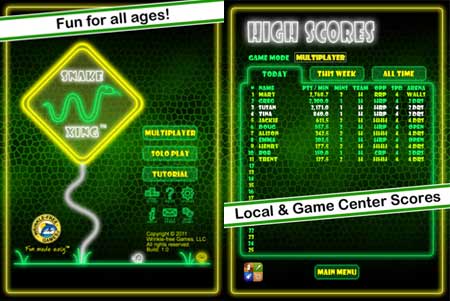 The latest title on the block for owners of the Apple tablet is Snake Xing from Wrinkle-free Games which recently made its debut on the iPad. This offering is the advanced version of the popular erstwhile Snake game and should bring back fond memories of a decade back wherein the original one was a rage on the basic mobile phones.

This multiplayer arcade treat allows four gamers to play on the iPad at the same time. Every player has to control their respective snake from the given corners of the tablet. The aim is to keep growing the virtual snake’s tail by letting it eat the scattered pieces of food safely and then slither back to their dwelling pits. While guiding the reptile back, gamers have to see to it that their virtual pets do not collide into any other snakes.

“You’ll have fun knocking your friends’ tails off as you become king (or queen) of the snake pit. This retro style arcade game is simple enough to learn that newcomers can quickly join the fun. Short duration matches lasting 1 to 3 minutes reinforce the game’s low barrier of entry with minimal time investment. It’s perfect for parties, family night, or just hanging out,” explained David Miller, President of Wrinkle-free Games. 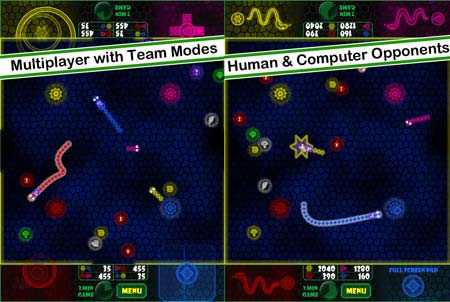 The free-for-all format lets players crash into the opponent snake’s tail and collect the scattered pieces. Gamers have to glide their slithery critters over temporary power-ups which in turn boost their lives. The game comes incorporated with quick play sessions of up to one to three minutes per match and features competitive as well as co-operative team modes.

Snake Xing for iPad from Wrinkle-free Games price reads at $3.99 and is now available at the App Store.