Home Other Brands SmartNaMo Saffron One, Two smartphones put up for pre-order in India

Remember those SmartNaMo phablets called Saffron One and Saffron Two? Well, all you Narendra Modi supporters out there will be glad to know that they have been put up for pre-order in India and interested users can pay Rs 999 to pre-book the devices via Snapdeal. Both phones will knock on their doors anytime after the second week of October.

The Saffron One is a 5-inch smartphone that is available in variants with either 16GB or 32GB onboard memory and lets users choose between black and white shades. One the other hand, the 6.5-inch Saffron 2 arrives drenched in the hue of white and offers only 32GB onboard storage. Most of the other specifications of the two devices are exactly the same. 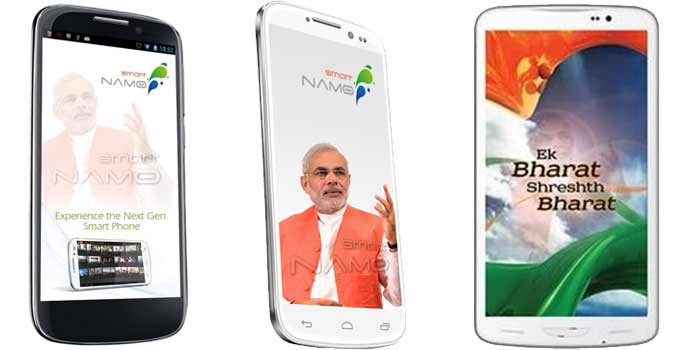 Both the gadgets are based on the Android Jelly Bean 4.2.1 OS and acquire multitasking properties from a quad core processor ticking at 1.5GHz. All the 16GB versions have been loaded with 1GB of RAM, while 32GB models employ 2GB of it for supporting the chipset. And the powerful SoCs are likely to require more battery life, for which the company has provided a 3150mAh battery.

Capable of rendering visuals in 1920 x 1080p resolution, the SmartNaMo phones are the proud owners of dual cameras. A 5MP one rests on the front, while a 13MP snapper lays claim over the back panels. You can expect these devices to tag along other essential features like Wi-Fi, Bluetooth, GPS and more from these phablets.