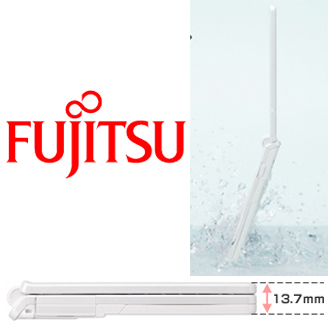 Fujitsu has released the F705i mobile phone in Japan. It is claims to be the slimmest phone ever as well a water proof mobile phone.

The Fujitsu F705i has 1.3 mega-pixel camera which provides a quick zoom function and adjusts the size of text on the screen with a touch of a button.

The phone which is claims to be a waterproof one is designed in such a way that it works even when immersed in one meter deep water for half an hour.

The other important feature offered by Fujitsu F705i includes Super Clear Voice and Super Clear Mike. This feature adapts the call volume and adjusts itself to suit the background noise while making a call.

The Fujitsu F705i offers 170 minute of talktime or 100 minutes of video calling on a single charge.

The Fujitsu F705i will be made available in Japan. However, there is no word on the price and availability yet.