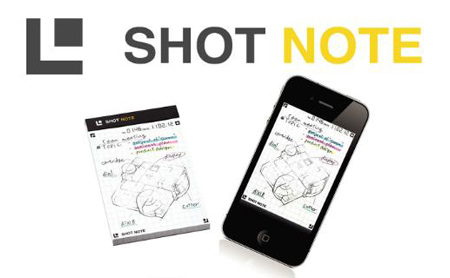 After becoming a sellout in Japan, the Shot Note memo pads will release for iPhones in the U.S. These pads can be used to scan and store handwritten notes in a digital format on iPhones. This is useful for retaining notes and avoids their misplacement.

Instead of writing on memo pads, papers, note cards and post-its, users of the iPhone can conveniently store their notes in their devices without worrying about losing or forgetting them. Users are enabled to date, tag, organize, store share and sort their electronic notes after downloading the app. They can also search for them on their iPhone and upload them to Evernote with ease.

Koichi Motegi, CEO, Granroue Inc. stated, “More than 300,000 units of SHOT NOTE memo pads were sold within the first five months of release in Japan, along with over 100,000 SHOT NOTE apps downloaded. These numbers far exceeded King Jim’s original forecasts. We are excited to be a distributer of SHOT NOTE memo pads made by King Jim and look forward to having an even greater success here in America.”

After starting the application, users have to take a picture of their handwritten notes on the Shot Note paper. Identifying markers at its corners, the app automatically makes up for the color, size, picture perspective and distortion. Thus it fits the notes properly into the screen.

While the Shot Note memo pads can be purchased at Amazon.com for a price of $12.95, its app can be downloaded on the iPhone from the App Store for free. An app for Android phones is also on its way.