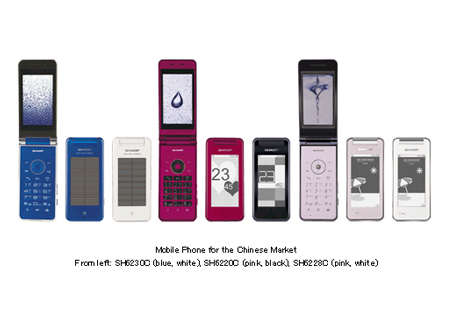 Here’s some interesting tidbit for mobile savvies in China. Sharp Corporation is all set to commercialize a handset encompassing a solar cell module for China from February 2010.

This is claimed to be the first solar-powered device by Sharp for markets abroad. In 2009, Sharp released solar-powered handsets in Japan. These mobile phones are quite popular in that market, thereby mirroring a fresh increase in the amount of economically minded customers.

The SH6230C is a GSM mobile phone and integrates Sharp’s proprietary solar cell module. The device comes with a huge 2.9-inch LCD screen, and a 5-megapixel autofocus camera. The phone is available is two colors namely blue and white. Since there appears to be increasing demand for the solar charging function, the company is geared up to deliver solar-powered handsets to international markets.

Sharp is all set to roll out two new models namely SH6220C and SH6228C in the Chinese market. Both these devices are GSM mobile phones and have built-in Memory LCD. The Memory LCD is said to be a low-power-consuming display proving elevated visibility under the daylight. The Memory LCD can also exhibit details such as time and e-mail status always. The SH6220C mobile phone is available is pink and black. The SH6228C handset comes in 2 colors namely pink and white.

The pricing of these mobile phones are currently under wraps.