Both SD cards are designed for professional use and will provide photographers with the needed memory performance to complement their gear. The 512GB SanDisk Extreme Pro SDXC UHS-I is a top of the line chip from the company and it has the highest capacity as compared to counterparts in the market. 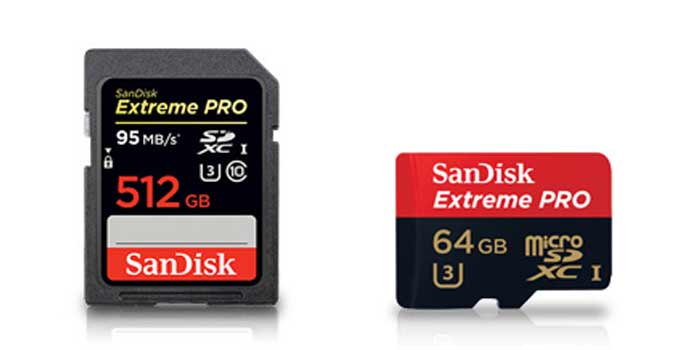 Aside from being able to deliver snappy read and write speeds of up to 90MB/s and 95MB/s, respectively, the card is designed to operate at its full potential in harsh environments as it’s temperature proof, waterproof, shockproof and x-ray proof. There’s also lifetime warranty on the chip and why not, considering that it costs Rs 51990 a pop.

Then we have the SanDisk Extreme Pro microSDXC UHS-1 card with 64GB storage which is being touted as the world’s fastest in its category. This SD card is priced at Rs 9700 which is enough to land you a 128GB class 10 microSD card, and it can deliver the same data speeds as its 512GB SDXC sibling. What’s more, it is also certified to be waterproof, shockproof, x-ray proof and temperature proof.

SanDisk notes that the 512GB Extreme Pro SDXC UHS-1 and its 64GB microSD sibling will go on sale in India via retail stores and ecommerce websites. The company has also upgraded its existing Extreme, Extreme Plus and Extreme Pro microSD series to meet U3 standards for 4K video recording.