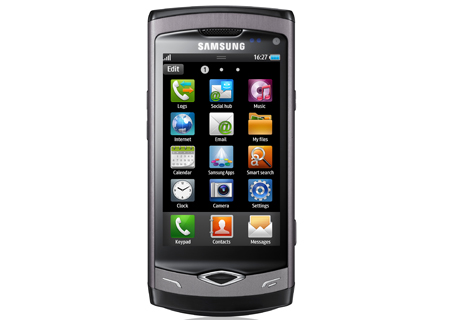 Users who crave for a smartphone with an eye-catching screen and a flawless, sleek body will glee at this news. Samsung recently announced the commercial availability of the Samsung Wave S8500 in European countries including Germany, France and the UK.

Bada platform initiated by Samsung is the keynote of the company’s commitment to ‘smartphone democratization.’ Including Samsung Apps which are accessible from the device, a total ecosystem is built around the bada platform. 80 countries will enjoy Samsung Apps when the Wave launches. Premium content and applications will be increased in association with partner companies and developers.

“The Samsung Wave represents our strategy to deliver rich, exciting smartphone experiences to everyone. This launch will make our platform vision a reality and consumers, developers and operators will experience the freedom of choice that bada enables,” commented JK Shin, President and head of the Mobile Communications Business at Samsung Electronics.

Samsung bada SDK (Software Development Kit) will enable users to enjoy a line up of new applications supported by it. Recently, application developers used the beta version of the SDK and the complete bada SDK 1.0.0 will be available for download shortly.

For music enthusiasts, the homepage of the phone can be converted into an intuitive media player. Multi codec support for DivX, Xvid, MP4 and WMV, HD video 720p decoding and recording ability and support for virtual 5.1 surround sound transfer the device into a terrific entertainment system. Personalization is also possible since the page can be tailored to feature favorite images.

Quick panel for prioritizing and organizing apps is also included. Other preeminent features include motion UI, Smart Unlock and a customizable widget screen. Moreover, it is touted to be the first handset in the world to integrate Bluetooth 3.0 and WiFi 802.11n standards.

Availability of the Wave will be taken forward from European countries to Southeast Asia, China, the Middle East and Africa, and Latin America. The pricing details are yet to be revealed.