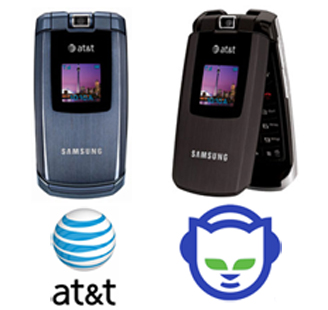 AT&T announces the launch of a new mobile phone called the SLM by Samsung. The mobile phone is light in weight and offers the best music and multimedia capabilities.

The SLM is a feature packed phone with a brushed-metal finish clamshell-shaped mobile. The phone is available in two colours brown and blue.

The other features of the SLM phone by Samsung are AT&T Video Share, stereo Bluetooth, a 2.0 mega-pixel camera with video recording, extendable 512 memory microSD card slot and 3.5 mm headset adapter.

The Napster Mobile service enables users to easily search a music catalog of 5 million songs, preview samples of each song and purchase as well as download songs on their SLM handset in less than a minute.

The AT&T users are also allowed to make calls in 195 countries and download data in 139.

The Samsung SLM which is also called the Napster Mobile will be available at AT&T retailers for an introductory price of $149.99 which comes with a two-year contract activation agreement and a $50 mail-in rebate on the 23rd November.