A Samsung SCH-W789 Hennessy handset has landed out of nowhere, and now it appears that the South Korean electronics giant is gearing up to launch not one but two dual screened flip phones soon. You must be remembering the Galaxy Folder smartphone which was leaked a few days back, but the newly rumored device apparently has nothing to do with it.

Samsung is seemingly looking to bring the flip phone back in vogue, and by equipping models with dual touchscreen displays, it surely has a vision for this change. The images of the SCH-W789 Hennessy have come via Sammy Hub. The website has asserted that this handset is aimed at China Telecom’s CDMA and GSM networks. 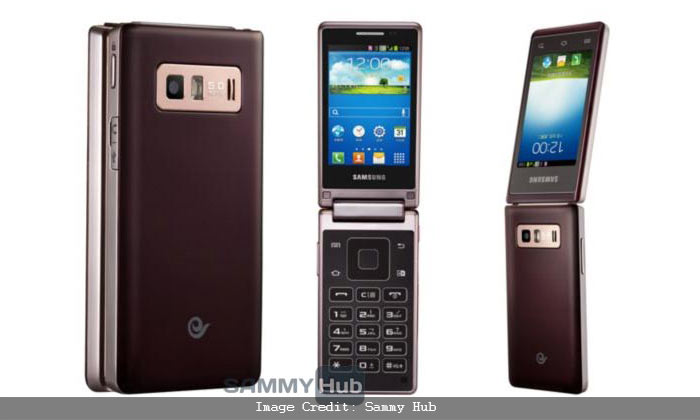 It supposedly kicks in a 1.2GHz quad core processor and runs the Android 4.1 OS. Moreover, it is even said to comprise a 5MP camera with flash. The two HVGA displays that have been embedded on it are both 3.3 inches in size, according to the leak. A microSD card slot and 1GB worth of RAM are some of its other rumored specifications.

On the other hand, the Galaxy Folder smartphone which we had heard of earlier this month apparently features two 3.67-inch AMOLED displays with a 480 x 800 pixel resolution each. It is claimed to run on a 1.7GHz dual core Qualcomm Snapdragon 400 processor. 2GB of RAM as well as compatibility with NFC and LTE form part of the attributes of this rumored device as well.

About the Samsung SCH-W789 Hennessy and the Galaxy Folder, we’ll have more when we can get our hands on some concrete information.