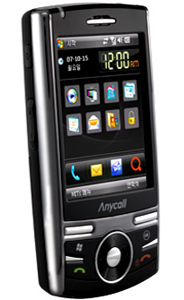 After the successful debut of the iPhone in the United States, touch screen mobile phones have become very popular in the high-end market. No matter, if people use it for listening to music, checking e-mails and for casual Web surfing. Matching a recent trend, Samsung Electronics is launching its first touch-screen called the “M4650 the Multi-Touch Phone”.

The form factor of the full Internet-browsing mobile phone includes 2.8-inch LCD screen which doubles as a keypad. This handset screen is smaller than the iPhone’s 3.5-inch display, and hence a stylus pen can be used.

The company in Korea is preparing the Windows Mobile 6-based touchphone for the device’s domestic market. It goes along with the other mobile phones being a keyless and finger-friendly input that LG, HTC, Apple and others have adopted recently.

This “Multi-touch Phone” M4650 will be available via LG Telecom for something in the range of 500,000 won (about $550), excluding rebates from the mobile carrier.