Samsung has just unveiled a new range of curved HD TVs in India starting at a price of Rs 162900 because you know, a life-size entertainment experience doesn’t come cheap. The curved HD TVs series includes a 105-inch screen option whose cost will be mentioned in the second half of 2014 when it is due to be released.

If you’re okay with a regular flat-screen, there are 55-inch or 65-inch models to pick from and they’re nailed at Rs 293900 or Rs 409900, in that order. Another available option is the Samsung HU7000 HD TV with a 40-inch panel and a Rs 104900 tag. The curved-screen TVs are claimed to be viewable from extreme angles, deliver high quality 4K resolution visuals and offer a wide field of view.

Now you’re thinking about the issue that will crop up when the stuff you’re watching is not beamed to your TV in ultra high definition, right? They’re fitted with a technology which converts low resolution, 720p HD and 1080p full HD content into visuals with near-UHD clarity. Samsung’s UHD TVs work with HDCP 2.2, HEVC, HDMI 2.0 and MHL 3.0 standards. 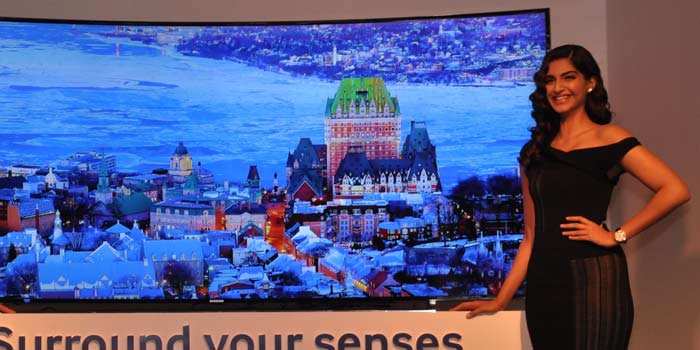 So you can swap the old parts in your computer for newer ones. Well, Samsung’s UHD TV also features a One Connect Box which is called the ‘brains’ of the set and this can be replaced with the company’s UHD Evolution Kit when you want to upgrade your TV. And then there’s the Smart TV Hub too.

Now if only someone would be kind enough to lend us the rest of the Rs 400000 we need to get our hands on the new 65-inch Samsung curved HD TV.