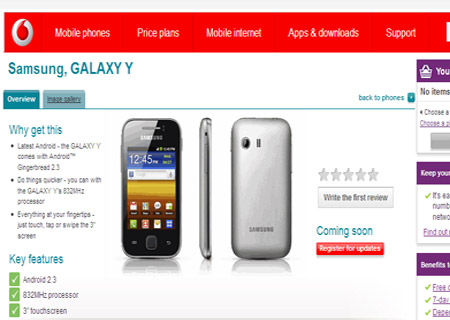 Vodafone has announced the UK availability of the Samsung Galaxy Y smartphone. The handset is listed under the ‘coming soon’ category of the Vodafone UK product page which details its key features.

Running on Android Gingerbread, the entry-level smartphone embeds a 3-inch QVGA touchscreen with a 320 x 240 screen resolution. It is powered by an 832MHz processor and integrates a 2MP camera in its slim body. Users are provided access to several homescreens where they can place icons and shortcuts. The handset offers millions of apps to users via the Android Market.

It equips Samsung’s TouchWiz interface along with providing HSDPA and Wi-Fi connectivity options. The smartphone also incorporates a microSD memory card slot and has been named according to the company’s new naming strategy that was announced last month.

Belonging to the Y range, it features in a category aimed at the ‘Youth’ market and those seeking an ergonomic, simple and affordable smartphone. This GPRS and EDGE enabled handset measures 104mm x 58mm x 12mm and weighs about 98g. Providing 160MB of internal storage, the memory can be expanded up to 32GB with microSD cards.

This upcoming device includes Samsung’s Social Hub for serving social networking purposes as well as the Swype on-screen keyboard for convenient text input. It is capable of delivering five hours of talk time with its 1,200mAh battery.

The price and availability of the Samsung Galaxy Y has not yet been listed on the Vodafone page.