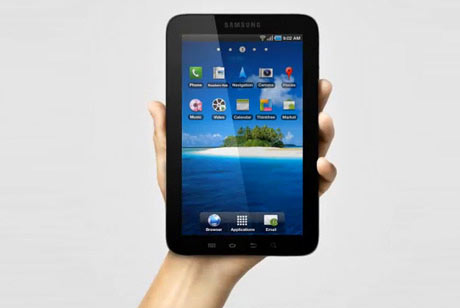 Just a little while back, we reported that Samsung celebrated its Apps’ birthday. Now according to Engadget, the Samsung Galaxy Tab has been sighted with AT&T branding.This offering is supposedly working on Android 2.2.

The Galaxy Tab has been at the pit of quite a few rumors about which carriers it will emerge with. Since now the Tab has been spotted with AT&T emblazoned on it, most probably the carrier will add-in another tablet to its Dell Streak and iPad lineup. Until now not many carriers have picked up tablets and thus it has been alleged that AT&T is currently winning the race with three in its kitty. Furthermore, there are speculations which state that the Samsung Galaxy Tab might also come through Verizon and Sprint.

Apparently, there is word in the market that this phone-cum-tablet hybrid might sail in around December. This Tab might see the light when the world is out celebrating Christmas, so users can probably add it to their wish list.