The Samsung Galaxy S5’s specifications have leaked less than two weeks before the device is slated to be released. A retail box of the smartphone featuring all the details was captured on the camera. Let’s see what the fifth generation device has in store for us.

The image posted below that was leaked by the guys over at samsunggalaxys5.nl, clearly shows that the Samsung Galaxy S5 will flaunt a 5.5-inch Super AMOLED touchscreen which delivers QHD visuals, that is, 1440 x 2560p resolution. Sony devices will have some tough competition to tackle as the upcoming smartphone from the South Korean manufacturer’s stable employs a 20MP rear facing camera with auto focus. 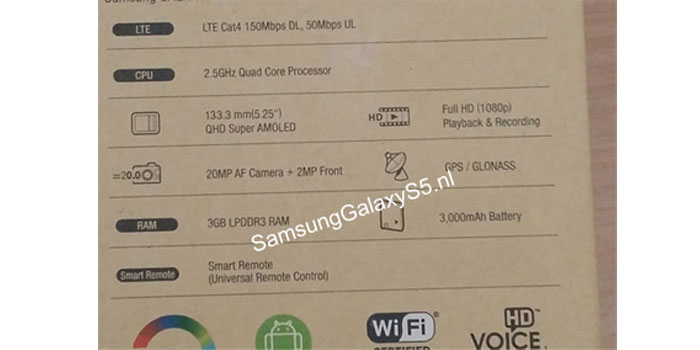 A 2MP webcam has also been placed alongside the screen to help users make video conferencing calls over the internet. It should binge on the Android KitKat 4.4 OS and the LTE-enabled version of the gadget will be powered by a 2.5GHz quad core processor, probably the Snapdragon 805 SoC. And just like the Note 3, the S5 tags along 3GB of RAM. A 3000mAh battery will be present to cough up the juice that lasts for at least an entire day. 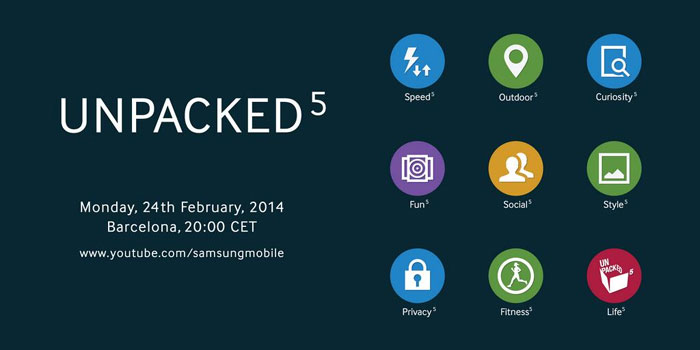 The Samsung Galaxy S5 is slated to be unveiled at the Unpacked 5 event slated to be held on February 24 in Barcelona, Spain at the MWC 2014.

Key specs of the Samsung Galaxy S5 at a glance: