It happened with iPhone 5S’ fingerprint scanner and now the biometric sensor on the Samsung Galaxy S5 has been hacked too. In a YouTube video uploaded by SRLabs, you can see the Galaxy S5 being accessed with a portion of rubber molded to replicate the thumb print used to unlock the phone.

SRLabs has been insisting that such methods are not secure for keeping devices locked. It’s not just Samsung’s latest flagship and the Apple smartphone which let users access them after scanning for fingerprints. Other handsets like the HTC One Max, laptops and payment terminals employ this technology too. 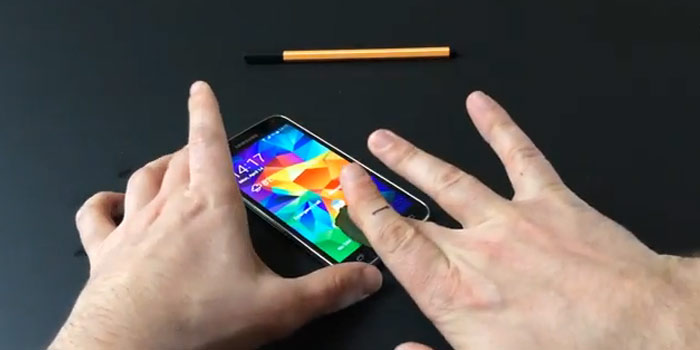 As TechCrunch points out, the biometric sensor on the iPhone merely permits users to authorize App Store payments. Samsung has inked a deal with PayPal, which means Galaxy S5 owners face the bigger threat of having a huge part of their earnings stolen by hackers.

In the video posted below, the testers first train the Galaxy smartphone to recognize their print – the way you would do if you just bought it and wanted to get it to register your fingerprint since you’re the owner. The next move is to replicate the concerned print.

As you can see in the clip, immediately after getting to device to detect his print, the ‘hacker’ duplicates it by pressing the finger being used into some sort of rubber material. And guess what, swiping this mold across the scanner unlocks the handset smoothly.

Of course, it would be a tougher job for a would-be hacker to lift your fingerprint from a surface you left it on and then use it to unlock your Samsung Galaxy S5. But the point is, it’s not an impossible task.