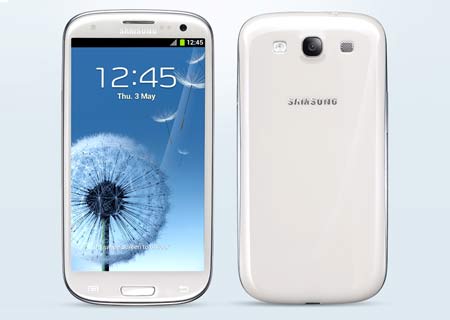 Probably because the South Korean company has decided to keep mum for a while, gossip about the Samsung Galaxy S III seems to be hitting us quite often. Currently, tech world is fixated with a new image of the slim S II’s successor, which is touted to find its original place in the PowerPoint file of a certain PR organization.

The photo has been spotted in a presentation file that supposedly belongs to the PR firm, Weber Shandwick. Although the image does not reveal much about the device depicted in it, a recent report by Ubergizmo says that it might not be the much anticipated phone. The sneak shot shows its front and side profile along with the PR company’s logo on it.

The picture has the name of the handset written besides it in the form usually used by the predecessor. The website thinks it is not likely that a PR agency would place its logo on a presentation file in this fashion. Apparently, the company will not be caught building a white chassis with a black ring around it. The new one shows off a home button on it too. According to the buzz, this trend has not been followed by Samsung smartphones since the Galaxy Nexus, which was released last year.

It is being speculated that the Samsung Galaxy S III might pick the May 22 Unpacked event in London for its launch.