Entering the arena reserved for affordable Android smartphones in the country is the Samsung Galaxy S Duos 3 which, as its name suggests, was preceded by two other similarly named devices. However, it’s still not that big an upgrade over both of them, and we don’t see it being a huge threat to other similar handsets in the Indian market.

Basically, the Galaxy S Duos 3 is still to be made official by the South Korean giant, but it has landed in the country nonetheless. What’s more, it has already been made available for purchase by a Mumbai-based retailer named Mahesh Telecom at Rs 7999. Manish Khatri, the owner of this business has revealed via Twitter that its MRP is Rs 8590. 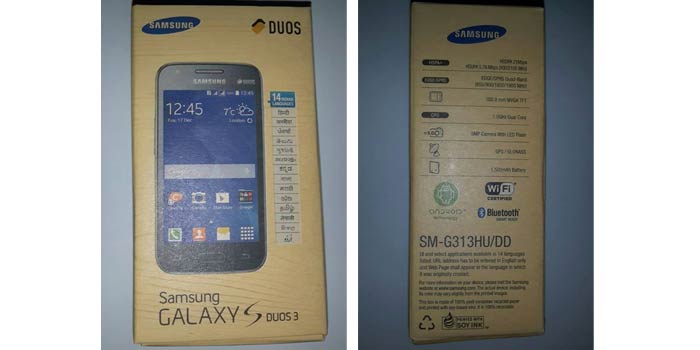 We even know all the key specs about this phone, so let us take you through the important ones. The Samsung Galaxy S Duos 3 handset houses a 4-inch 480 x 800 pixel display, and is powered by a dual core processor with a clock speed of just 1GHz. It packs 512MB of RAM, and offers a 5MP rear and a VGA front camera. There’s some respite in the OS department at least, as the chosen software is Android 4.4 KitKat.

A look at the specs of the Samsung Galaxy S Duos 3 smartphone:

The Samsung Galaxy S Duos 3 will be up against far better smartphones in terms of specs, which lowers its chances of leaving any actual impact. Anyway, it seems its stocks have reached retail stores in Mumbai at least and are expected to arrive in other areas soon. Those interested can check their local retailers.