Samsung has started rolling out the much awaited Jelly Bean 4.1 update for its Galaxy S Advance phone in India. It can be downloaded now by owners of the device using the Kies client through PC or Mac. There’s still no news about an OTA rollout. And those who haven’t found it may not get disappointed, as it may take a few days for it to land on all devices. What’s strange though is that this Gingerbread device is still to get a taste of Ice Cream Sandwich, and has directly made a jump to Jelly Bean.

The upgrade follows the recent push out of JB onto the S2 as well as the earlier Note. And a lot more devices are to follow, as the company had recently announced a long list of its products which will be getting Jelly Bean updates this year. They include the likes of the Ace 2, the Beam, the Ace Plus, the Mini 2, the S Duos and more. Those waiting for these devices to finally get updated can rest assured that the software should be rolled out pretty soon. 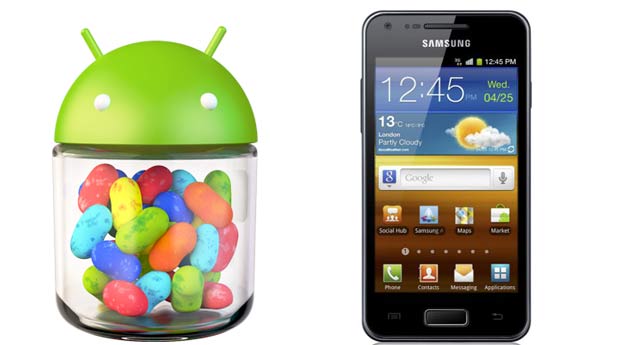 Bringing our attention back to the phone in question, it can be observed that it has been more than a year now after its initial release. Equipped with a 4-inch Super AMOLED capacitive touchscreen, it proffers its visuals with a resolution of 480 x 800. As mentioned above, the stock OS is Android v2.3 Gingerbread, but that shouldn’t matter anymore since the Jelly Bean update is out.

Its other highlights include a 5MP rear-facing camera which grabs the support of an LED flash as well. Moreover, it makes possible HD video recording and playback with 720p resolution at 30fps. And there’s even a 1.3 MP front-facing snapper to facilitate video calling. Running under its hood is a dual core Cortex A-9 chipset that has been clocked at 1GHz. 16GB woth of internal memory is on offer to users, but a microSD card slot ensures that the overall hoarding capacity can be expanded till up to 32GB.

Those in the country looking to purchase the Samsung Galaxy S Advance at the moment may take note of the fact that has recently received a huge price drop, taking its value down to Rs. 14,500.