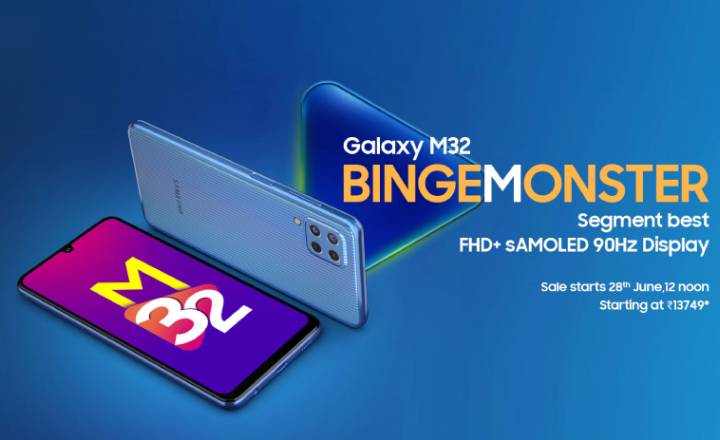 The Samsung Galaxy M32 gets the Infinity-U design on its front. The estate is occupied by a 6.4-inch Super AMOLED display with FHD+ resolution. Coupled with a 90Hz refresh rate, this screen also offers a peak brightness of 800 nits, which makes it great for outdoor usage.

Another major highlight of the Galaxy M32 is its 6000mAh battery that promises a talk time of up to 40 hours. The chipset at its heart is the MediaTek Helio G80, which features two Cortex-A75 cores clocked at 2GHz, and six Cortex-A55 cores running at 1.8GHz.

Coming to the cameras, this Samsung handset offers a 64MP main unit that’s complemented by an 8MP ultra-wide snapper. The macro and depth sensors onboard this phone are both 2MP in resolution. As for the front shooter, it’s a 20MP camera that lets you create custom filters for your selfies.

One UI 3.1 is the software interface that the Galaxy M32 has gone for. It’s set up on the base layer of Android 11, so you can expect an update to Android 12 next year. The phone also supports the Samsung Pay Mini app and the privacy-focused AltZLife mode.

The Samsung Galaxy M32 is listed on Amazon India right now with a ‘Notify Me’ button. It will be made available on June 28 at the above-mentioned prices.