The Samsung Galaxy J7 Duo just got a lot more official, with the phone’s user manual appearing on the brand’s official site under the model number SM-J720F. It’s even gotten listed on the company’s India website which likely means that it’s coming to the country first.

The user manual reveals a surprising amount of information about the Galaxy J7 Duo. You can see the outline of the phone above, confirming specs like the home button embedded with a fingerprint sensor and a 3.5mm headphone jack. Interestingly enough, it seems Samsung is blessing it with a dual camera setup.

Over on the flip side, the selfie snapper comes hand-in-hand with an LED flash unit to brighten up photos taken in challenging lighting conditions. The SM-J720F also comes with a brand new feature which is not commonly spotted in budget Samsung phones – Bixby support. 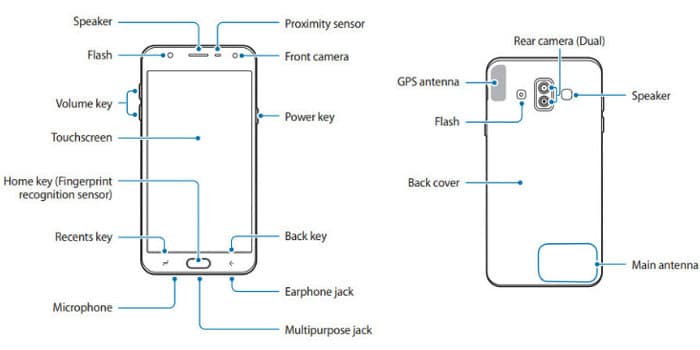 The Galaxy J7 Duo has gotten bundled with Bixby Home, allowing the smartphone to recommend services on the homescreen. It show you this information based on your usage patterns and routines. It was last spotted on the Galaxy J7+ which came out in September 2017.

Speculation so far has suggested that the Galaxy J7 Duo will be launched with a 5.5-inch screen, 2GB or 3GB of RAM, 32GB of storage, an Exynos 7885 processor, a 12MP main camera, and a 7MP front-facing lens. It will probably run on Android 8.0 Oreo straight out of the gate.

We’ll let you know the moment Samsung decides to unveil the Galaxy J7 Duo in India.