The Samsung Galaxy Core Plus smartphone has been unveiled in Taiwan without any fanfare and the company has yet to let out details regarding its global availability. But considering that the Galaxy Core was released in India, we are expecting the Korean company to bring this gadget to the subcontinent as well.

Although it is a successor to the previous-generation phone, it doesn’t bring many advanced features to the table. Both the devices are pretty similar on the specifications front. The new handset’s front panel is graced by a 4.3-inch TFT touchscreen of 480 x 800p resolution that’s exactly same as that of the Galaxy Core. Even the two cameras have been retained. So you can expect a 5MP primary snapper with LED flash and a VGA webcam for video conferencing purposes. 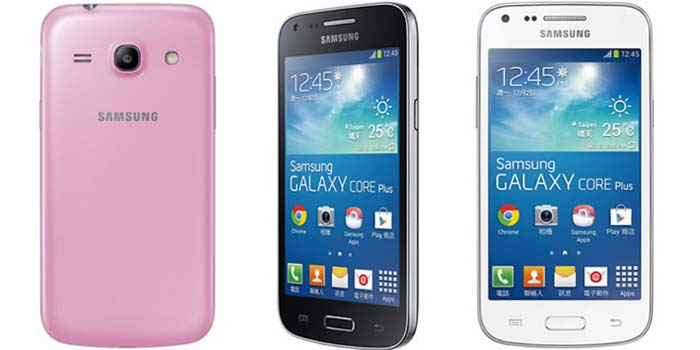 Coming to the internal working of the dual SIM smartphone, it makes use of the same old dual core processor which can sprint at a speed of 1.2GHz. You will also find 768MB of RAM within the confines of the new device. And for keeping it powered up for an entire day, the company has chosen a 1800mAh lithium-ion battery yet again.

Now, here’s something that has been changed. The gadget no longer relies on Jelly Bean 4.1, but binges on the version 4.2 of the Android OS. And instead of 8GB onboard memory, you will find merely 4GB of it which is expandable by up to 64GB.

The Samsung Galaxy Core Plus costs 7,990 Taiwan Dollars (approx. Rs 17,040) and it should arrive in other regions soon.