The Samsung Galaxy A7 which has been extensively leaked over the past few months, has finally come out of hiding and it could be launched in the coming days as the phone has received certification in China. What’s more, the device has already made its way through the FCC, according to reports.

Almost everything about the Samsung Galaxy A7 has been revealed online thanks to regulation website TENNA which publishes details on each device that gets certified for sale in China. Also, this is the first time we’re getting a look at the smartphone in question, which to no surprise, looks strikingly similar to the A3 and A5 handsets in the same series. 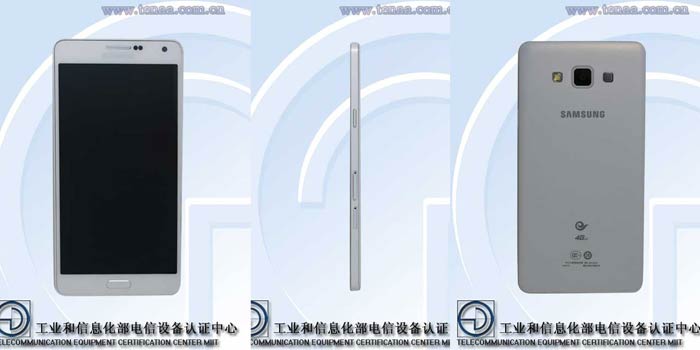 The device comes with a full-metal uni-body design unlike the Galaxy Alpha which retains a few plastic components. Additionally, the Galaxy A7 is the thinnest handset Samsung has ever created, though not as skinny as the Gionee Elife S5.1. The phone is just 6.3mm thick, making it a tad slimmer than the 6.7mm A5 and Alpha.

And while previous rumors suggested that the device would have a 5.2-inch display, we can now confirm that the model headed to China will flaunt a 5.5-inch screen instead. This panel will most likely be a Super AMOLED one with 1080p visuals. Other details of the smartphone are more or less the same as what we already know, thanks to leaks.

The Samsung Galaxy A7 could go official any day now and it’s most likely to reach China first.