Home Samsung Samsung Galaxy A11 goes official without price tag, here are all its...

A new handset has emerged from Samsung’s stables in the form of the Galaxy A11, which boasts of a hole-punch display and a triple rear camera setup. Although it looks very much like an affordable handset, its price and release date details are out of reach at the moment. The phone has only been found listed on the company’s official press website. 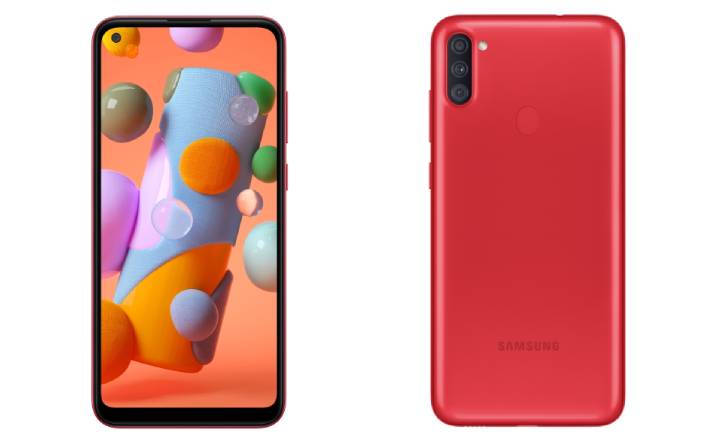 The Samsung Galaxy A11 looks set to be marketed as a budget device for the youth, and this fact is made clear by its color options that include blue, red, white and black. It’s quite a novelty to see a hole-punch display on such a low-end device, but it’s something that will definitely attract more users towards this newly unveiled handset. This is a 6.4-inch HD+ TFT panel, by the way.

As for its internals, it’s powered by an unspecified 1.8GHz octa-core processor that’s assisted by 2GB or 3GB of RAM, depending on the market. The phone comes with 32GB of storage as standard, and does hold a microSD card slot for further expansions. What’s surprising is it carries a 4000mAh battery inside it that supports 15W fast charging. On its rear is fingerprint scanner, while the phone also supports face recognition through its front camera.

Speaking about cameras, its rear setup includes a 13MP f/1.8 main snapper, a 5MP ultra wide-angle unit and a 2MP depth sensor for portrait shots. In the hole-punch at the front, sits an 8MP shooter. No other detail about this device is available as of now. In fact, we don’t even know the markets that the Samsung Galaxy A11 will be sold in, and whether it will arrive in India or not.