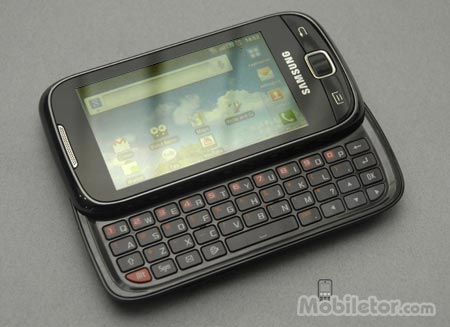 While Samsung’s Wave lineup may not have surfed through proficiently, the Galaxy portfolio managed to keep even those odd Android mobile cravings in check with devices like the Galaxy S, Galaxy 551 and so on. The increasingly popular OS ported on most of these devices could have contributed to those additional brownie points. That Apple claims Samsung to imitate the iPhone and iPad for its Galaxy lineup is a different thing all together. Given the underlying current of excitement associated with this archive in general though, it wasn’t long before we had our hands on the Samsung Galaxy 551 (GT-i551) for a review. The handset was packaged with a USB cable, earphones, travel adapter and user documentation.

The Galaxy 551 handset didn’t leave us impressed at first glance. The mere plastic fabrication and super light feel in our hands had us recheck if we hadn’t just landed a dummy. The phone is a mere 117gms in weight. The unit we received for a review was a plain black color and did nothing to titillate our senses. Not that phones are meant to but it’s just this sort of expectation you’re bound to have given the intriguing handsets seen every other day. Not steering away from the regular appearance of Android devices, the smartphone has the home, menu and back buttons seated right below the 3.2” screen. Samsung does add its own touch though with the placement of the other buttons. Contrary to popular placement, the power button has been shifted to the right rim and the top contour instead includes the USB and 3.5mm headset ports. The left edge features the plain volume rocker key. The earpiece, ambient light and proximity sensor are accommodated above the screen while the rear side holds the loudspeaker and the camera lens.

The 551 features a multi-touch capacitive display rendering support to 16M colors and a resolution of 240 x 400 pixels. We didn’t find anything worth complaining about as far as the touch on this phone is concerned. It didn’t require more than a nudge to get things started. The only bellyache with the screen appeared to be its enthusiastic brightness when in sunlight. The display is too reflective and only made it more difficult to actually read text. As we pushed out the slider, the solid mechanism in place said it’s a job well done. A slight nudge was all that was needed to discover the attached QWERTY keypad. The embodied backlighting together with the rather large profile of the keys had us nodding in to this piece of hardware. We would have nevertheless favored the buttons to be slightly raised than they were. The four flat rows of keys made it a tad bit bothersome to actually hit the intended key more often than we would have liked to. There was nothing of the onscreen keyboard that we hadn’t seen before. Yes, it’s awfully similar to the iPhone’s interface in the portrait mode with the keys only struggling to find their space on the screen. We did prefer it in the landscape mode. 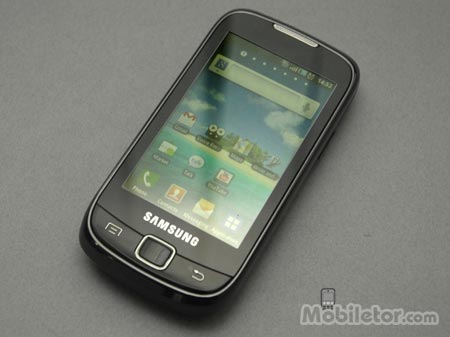 It was Android 2.2 that took charge of the handset. And as a wise move, Samsung has merged the platform well with its own TouchWiz UI. The Samsung Galaxy 551 lets you personalize 7 homescreens and have them loaded with favorite widgets. The menu on the other hand moves over two pages. The Phone, Contacts, Messaging and Applications widgets run along commonly through the interface with Applications transforming to Home when in a particular application or just the menu. While the pull-down menu on this handset seemed familiar, the quick launch buttons in its notification tray were a fresh inclusion. We liked Samsung’s attention to detail otherwise too which was pretty obvious in a host of other features. Our personal favorite was how long pressing the Home button popped up the recently visited applications and a Task Manager button. The latter did make it easier to end tasks and toggle between various applications. Downloading and installing applications was seamless too with downloaded content appropriately located for easy access. Layars, All Share, Twitter and Facebook besides the regular Google dose of Maps, Latitude and Places along with News Weather find their place as native applications in this handset. We reached out to the Android Market easily with our current favorite Angry Birds keeping us occupied long enough.

While there’s nothing to write home about the implanted 3.2MP autofocus camera without LED flash, it wasn’t a bad trip either. Captured still images were of respectable quality and we only found ourselves griping in environments with relatively low light. The video quality doesn’t deserve a mention with its measly 15fps recording capability though. On the brighter side, the handset does make it up with the audio. The included TouchWiz player almost does justice to the enriched sound the phone delivers. Loud and clear yet not tinny, there’s this optimum balance between the treble and bass that we’re sure will have a lot many audiophiles all ears. The player lends a helping hand to files in the MP3, eAAC+ and WAV format. Our time with the video playback was almost as good with the handset capable of playing out DivX, 3GP, MP4 and WMV file formats with ease. While on audio and video, we tested the integrated YouTube application too which seemed all skilful. The included earphones complete with replaceable ear tips sealed the good time we had on the audio front. 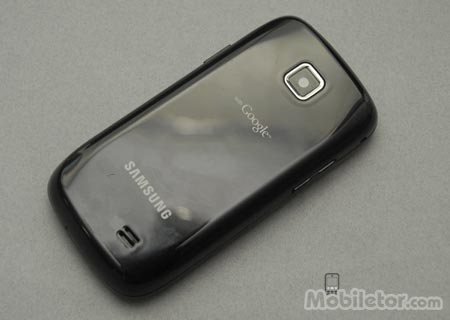 We hopped on to the Chrome Lite browser next which was quite a laggard with the web navigation. While pages were coughed up in their mobile optimized version, the overall slow performance put us off. Kinetic scrolling in particular was lethargic and we’re assuming the 667MHz processor is to blame for. Taking things a notch higher though is the handset’s tether-capability and the phone could immediately be turned into a portable Wi-Fi hotspot. The HTML browser also gets some Java affection which has things looking up. What’s more we could tweak search to suit our liking and even have shortcuts for quick launch applications. Syncing between various accounts and social networking sites is smooth sailing all along. The phone manages to stay up and running for just about a day upon moderate usage.

The phone’s highlight is surely its full QWERTY keypad that makes typing a comfortable affair.

With all the refinements on offer, the smartphone is without doubt quite affordable too.

The web browsing capabilities of the phone left us a wee bit disappointed.

It would be fair to say that Samsung has clearly played it safe with this Galaxy device. Our time spent with the handset was satisfying. With nothing worthy of being grumbled about, the phone misses out on just a few things here and there. Like the absent live wallpapers despite the Android 2.2 support and inconsistent web navigation. But there’s no denying the very affordable price range the phone has been placed in. The Samsung Galaxy 551 will set you back by just Rs. 13,750 and we’re marking the phone at a good 8.5 out of 10.