Samsung is reported to be prepping a foldable smartphone for launch in January next year, according to a tipster with ‘in-depth knowledge’ of the project. Rumored to be dubbed Project Valley or Project V, the handset is expected to sport a flexible dual display which opens and closes somewhat like a notebook. After all, an executive from Samsung Display was caught saying in March, that 2016 could see the dawn of the commercialization of foldable handsets.

According to the latest scoop (add one pinch of salt before swallowing), Samsung is working on not one, but two Project Valley prototypes. Both might carry 3GB RAM and microSD card slots for memory expansion. The battery powering each device will supposedly be non-removable. This makes sense since the company would want its exterior to be sturdy and as smooth as possible, given that it’ll already have some sort of seam where it folds. 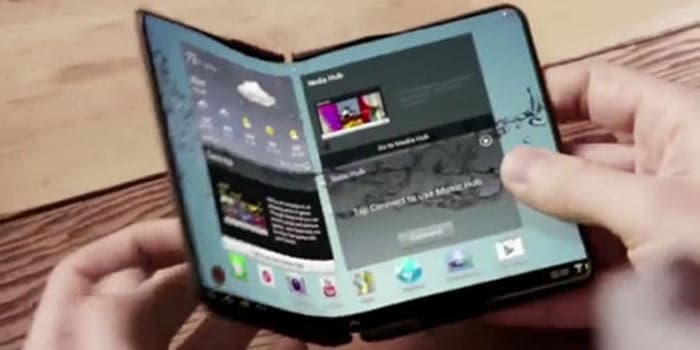 Qualcomm was apparently claimed to be plying Samsung with initial samples of the new Snapdragon 820 since the latter is extremely keen on testing the chip. There’s no word about Exynos in the G for Games post that reveals the source of this story to be Chinese social networking site Weibo. The South Korean mobile phone maker is anticipated to be trying the aforementioned Qualcomm processor on one of its foldable Project Valley phones.

The other variant is reportedly being run on the Snapdragon 620 chipset. The story doesn’t have much more to be getting on with. The images in this article have been taken from a YouTube video from 2014 that shows Samsung’s flexible OLED display smartphone and tab concept. If the company is indeed building a folding handset, it’s keeping both variants of the prototype very well hidden from prospective leaks considering the lack of pictures.

Of course, Samsung’s foldable smartphone could take the Galaxy Round path after release in January, and may be made available only in limited numbers in its home country.