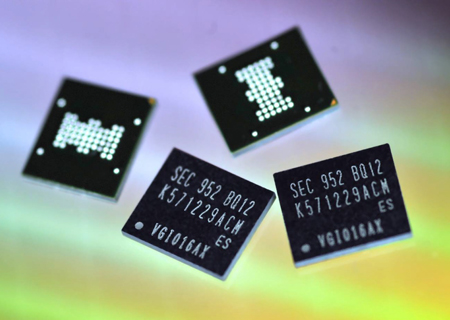 Samsung phones are all set to encompass a superior chip on their devices. Well, Samsung has declared the release of the industry’s first multi-chip package (MCP) with PRAM for using in mobile phones, starting later this quarter.

The 512 megabit Samsung PRAM in the MCP is backward attuned with 40 nanometer-class NOR flash memory in its hardware as well as software functionality. This facilitates phone designers the convenience of enabling multi-chip packaging to be completely compatible with past stand-alone PRAM chip technology. PRAM is anticipated to be extensively accepted the subsequent year as the descendant to NOR flash.

Dong-soo Jun, executive vice president, Memory Sales and Marketing, Samsung Electronics, commented, “Memories for portable consumer devices today are at a major turning point as mobile applications increasingly require more diverse memory technologies. The launch of our PRAM in an advanced MCP solution for the replacement of 40nm-class and finer geometry NOR meets this need head-on. Our PRAM MCP will not only enable handset designers to utilize conventional platforms, but expedite the introduction of LPDDR2 DRAM and next-generation PRAM technology as the leading-edge basis for high-performance solutions.”

PRAM, which hoards data by means of the phase change characteristics of its base material, an alloy of germanium, antimony and titanium, offers three-times quicker data storage performance per word as compared to NOR chips. This new PRAM-packaged memory merges the non-volatile nature of flash memory with the high-speed capability of DRAM. Its simplified cell structure makes designing MCP chips for mobile phones a quicker and effortless process, with the forthcoming use of 30nm-class and finer process node technology to surmount long-time design troubles intrinsic in NOR flash technology.

As a substitute for NOR, PRAM can more simply house the increasing demand for high-speed, high-density non-volatile memory in handsets and other mobile applications like MP3 players, personal multimedia players and navigational devices.