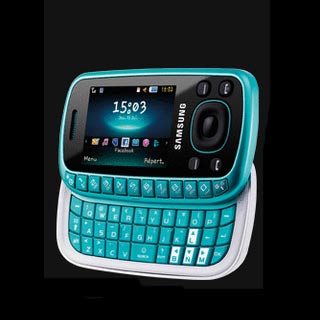 Just a few days back we had reported about the pink colored Samsung B3310 handset, and now the company has officially unveiled the handset, that too in blue color.

According to UnwiredView, the Samsung handset boasts of a 2-inch TFT display that offers 240 x 320 pixels resolution, and not 176 x 220 pixels which was assumed earlier. The B3310 provides Quad-band GSM/EDGE connectivity (850/900/1800/1900 MHz). This blue mobile phone is built with a full QWERTY keyboard and provides quick access to social networking sites like Facebook and MySpace.

The Samsung B3310 is equipped with a 2 megapixel camera featuring QVGA video recording capability. The side slider offers 43MB of internal memory and also provides support for MicroSD card. Reportedly, the dimensions of the handset are 91mm x 54mm x 17 mm and it weighs around 101 grams.

The B3310 offers talktime of up to 5 hours and standby time of about 380 hours. As far as entertainment features are concerned, the device packages music player and FM radio. Further, it presents Bluetooth 2.1 connectivity.

The company has not yet revealed the pricing details of the B3310. The phone is expected to release by mid-September in European markets.