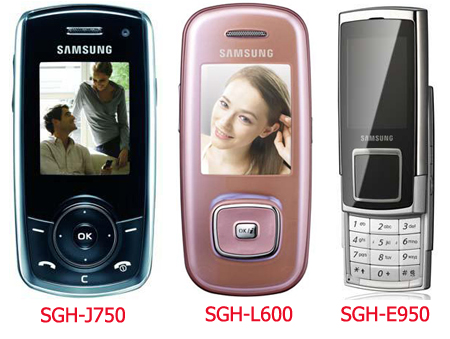 Samsung has launched a new range of handsets with attractive designs and powerful features. They include 4 new handsets which include the SGH-E950, SGH-L600, SGH-D880 and SGH-J750 The previously released Ultra Edition 12.1 (SGH-U700) is now available in new colors.

The SGH-E950 is a sleek slider with a cutting-edge sub touch navigation panel with input keys that change according to the menu requirements. It has a high resolution 3.2 Mega-pixel camera, music player with improved user interface, FM radio and document viewer. It also has connectivity like Bluetooth and USB.

The SGH-L600 is mainly made to suit the females including young girls. It is a slider which comes in bright candy colors. It also has Motion Wallpapers and fun idle screen. It also features a pedometer and burned calories counter for the health-conscious girls. It has a 2 Mega-pixel camera, FM radio and supports multi-codec music files and movies and also features a mini multimedia player.

The SGH-D880 is a power packed slider especially meant for executives with a dual standby function which will allow users to operate two SIM cards in one handset. The users will enjoy full connectivity on their handsets to various networks, facilitating file transfers and can easily connect to printers and stereo headsets with Bluetooth 2.0 and USB 2.0. It also features a 3 Mega-pixel camera as well as video and music availabilities.

The SGH-J750 is a versatile slider featuring full web browsing and 3G for speedy browsing and easy downloading. The phone also has 1.3 Mega-pixel camera, music player with stereo Bluetooth support and a 2nd VGA camera for video calls.

The SGH-J750 handset is available but the price is yet unknown. 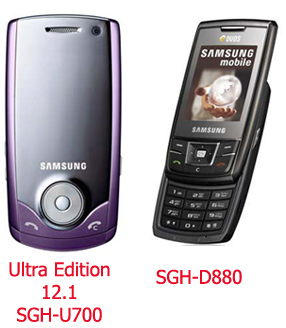 Samsung also unveiled new colors for its award-winning Ultra Edition 12.1, one of the world’s slimmest HSDPA phones which was launched earlier. It offers various multimedia features such as audio-compression technologies and also has 3.2 Mega-pixel camera.