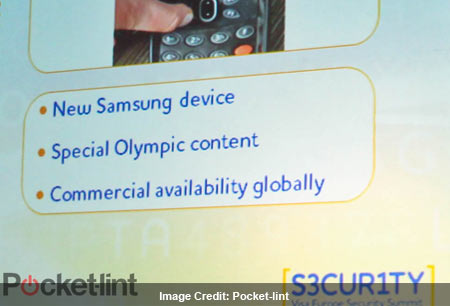 Visa is said to have partnered with Samsung to develop a Near Field Communication (NFC) enabled mobile phone, which should be released on the occasion of the London Olympic Games 2012. Visa, who is sponsoring the games scheduled for next year, also announced earlier this April that it will enable mobile payments for Samsung handsets.

This new device is expected to be incorporated with an NFC chip and will hit the shelves around the time of the Olympic Games. It will also be loaded with special Olympic content and roll out worldwide rather than just in London or Europe, confirmed Sandra Alzetta, Head of innovation and new product development at Visa Europe. Pocket-lint first broke the news while at the company’s first European security summit in Frankfurt.

Reportedly, Visa is working towards developing an NFC solution to microSD cards which should allow users to upgrade their current phone in the future. According to Alzetta, this is a step towards letting present users in on the NFC action. Along with this, the new NFC ready phones or memory cards will be useable at almost 160,000 terminals in Europe, including 70,000 shops, bars, and restaurants in the UK.

If the phone comes to reality at the suggested time, it will offer a contactless experience to thousands of people attending the London Olympics 2012.