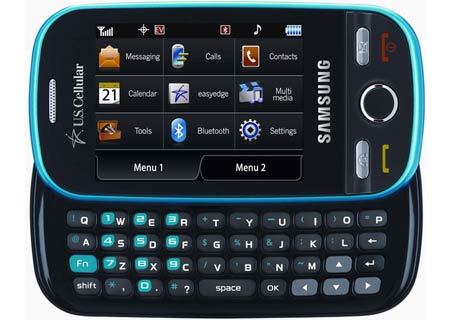 Touchscreen phones have flooded the mobile phone market but this phone ought to stand out. Samsung has joined hands with U.S. Cellular to unfurl a fashionable, feature-rich touchscreen messaging phone, the Samsung Messager Touch (SCH-r630). The phone is available in eye-catching black and vibrant blue with a convenient slide-out QWERTY keyboard.

The device is equipped with a full 2.6-inch touchscreen display featuring Samsung’s unique TouchWiz interface. This TouchWiz interface comes with specially designed widgets that allow users to customize and personalize their phones. The Samsung Messager Touch boasts of a widget tray which stores users most commonly used widgets. It is preloaded with easyedge services through which widgets and other downloadable applications like games, social networking and wallpapers are accessed.

“The Samsung Messager Touch is an exciting new addition to our messaging line-up. It’s a very cool phone, and our customers can add their personal touch by customizing the functions,” remarked Ed Perez, vice-president of marketing and sales for U.S. Cellular.

The Samsung Messager Touch comes with a 2.0 megapixel camera with camcorder to capture and record all the personal moments. Also, it can be stored instantly with up to 16 GB expanded memory microSD card. With a built-in music player and speakerphone, users can enjoy their favorite tunes while on the move.

Now it’s easy to text and view videos and pictures via text message with a slide-out QWERTY keyboard. Apart from this, the device is Bluetooth-enabled for seamless hands-free communication. Other functions include voice recognition software, three-way calling, speed-dialing and one-touch dialing.

The Samsung Messager Touch is priced at $49.95 and is available after a mail-in rebate at U.S. Cellular retail locations.