American carriers develop their own versions of big devices for offering their 4G LTE services, and T-Mobile has done just that with the Nokia Lumia 635 which was known from its leaks as the Monarch. The device hasn’t gone official yet, but confirmation has come straight from the EvLeaks Twitter account which is usually bang on with its claims.

A few days back, it had ruffled up a storm by saying that a certain Nokia Monarch device is headed to T-Mobile. Speculations started flying high following this, but it’s only now that some concrete word on the matter has emerged. 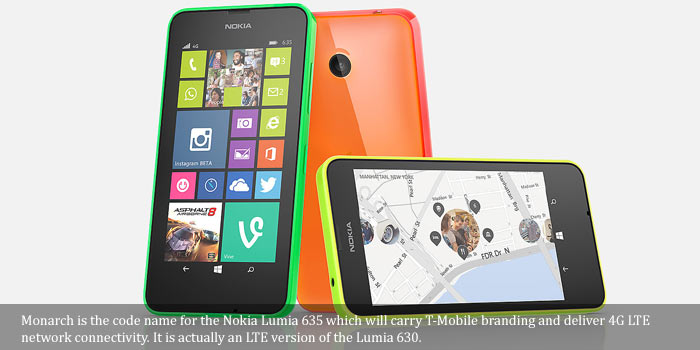 For those unaware, the Nokia Lumia 635 is the LTE version of the Lumia 630 which was unveiled earlier this month. This Windows Phone 8.1-equipped smartphone will feature on-screen navigation keys as well as some decent mid-range specs.

These include a 4.5 inch 854 × 480 touchscreen display, a 1.2GHz quad core Qualcomm Snapdragon 400 processor, 512MB worth of RAM and a 5MP camera. Moreover, it even grabs 8GB of storage and support for expansions of up to 128GB through its microSD card slot.

This device was unveiled alongside the Nokia Lumia 930 which too grabs the Windows Phone 8.1 OS, but features high-end specs. Its 5-inch full HD display is accompanied by a 20MP PureView camera and a 2.2GHz quad core Qualcomm Snapdragon 800 processor among other things.

The Monarch or the Nokia Lumia 635 for T-Mobile hasn’t been made official yet, and hence its price is unknown.

Here’s a neat look at the specs of the Nokia Lumia 635: