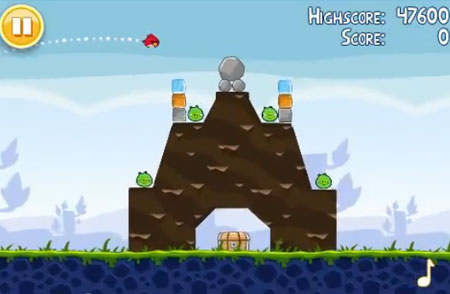 It was coming sooner or later and just a few days back we’d reported about Angry Birds title apparently hitting the Windows Phone 7 platform soon. The release of this game is indeed made official now on the Windows Phone blog. As per the announcement, a total of six games will be up for grabs from April 6 onwards and Angry Birds is one of the titles.

Angry Birds flying onto Windows Phone 7 will support Xbox Live, leaderboards and much more. With approximately 50 million downloads to its credit, the game seems to have remained as the top-selling iPhone app of all times. Along with Angry Birds the other games to hit the Windows Phone 7 platform include Doodle Jump and Plants vs Zombies.

Claimed to be inspired by a simple sketch of stylized wingless birds, the game intends destroying all the pigs on a playfield. Players have to control a flock of birds that are trying to get back their eggs from a team of evil green pigs. Empowered with a slingshot, gamers have to aim and shoot pigs stationed on or within various structures.

The pricing details about Angry Birds for the Windows phone platform hasn’t been disclosed yet.