Directi has introduced India to an app called Ringo which allows you to make international calls without your phone’s data connection and it doesn’t even need you to be signed into a Wi-Fi hotspot. It’ll be interesting to see how Airtel, Reliance, Idea Cellular and other network operators who are ever ready to cry foul about anything that threatens their SMS and voice revenues, react to this.

Ringo was previously rolled out in over a dozen countries including the US, the UK, Australia, Brazil, Canada, Germany, Hong Kong, Japan, Poland, Singapore, Spain and Switzerland amongst others. It was launched in May last year for those using iOS, Windows Phone and Android devices. While the application doesn’t use up your voice or Internet data specifically, you do need to pay for it of course. 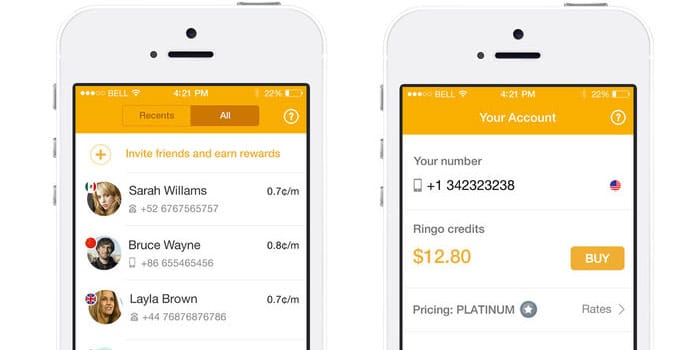 Users start by making an account and dropping anything between Rs 25 to Rs 250 into their Ringo wallet. It will be this money that the tool consumes as it routes calls like a normal service provider would. So all those international voice minutes, roaming charges and special calling cards need not be sought for if your wallet’s comfortable with the services of Directi’s app.

It hardly has to be said, but Skype, Viber, WhatsApp and others will have watch out too since Ringo’s two-pronged challenge affects applications as well as carriers. The company insists that the charges applied to international calls through the app, are 70 percent lesser as compared to the regular rates which are on offer by popular operators.

In case you’re wondering how Ringo manages to do its job, say you live in India and dial up someone living in the UK. The application connects you to a local phone network there and gives you as well as the receiver local numbers in order to hook both parties up to the same carrier circuits. The number you
are calling from isn’t masked in any way.

The best thing about it is that the person receiving the call doesn’t have to use Ringo in order for the app to function. As we’ve mentioned before already, you can download it from Google Play Store, Apple iTunes and the Windows Phone marketplace.