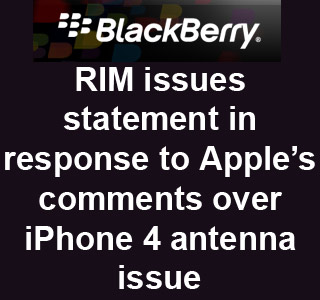 With the whole iPhone 4 antenna issue blowing out of proportion, RIM reverts back with a statement on their official blog. The company’s co-CEOs have jointly articulated their dislike of the fact that Apple has pulled in BlackBerry Bold 9700 into the controversy just to prove a point. They state that by doing this Apple is just trying to shift the attention from their device’s slip-ups to put them on RIM’s back.

The company claims that it has worked hard on its antenna design. This has helped them deliver excellent wireless data products, which have been providing users with proficient radio performance for more than ‘20 years’.The blog enunciates that RIM has created novel designs to minimize the risk of calls failing particularly in low network coverage areas.

It further alleges that it has prevented the use of designs similar to that of Apple iPhone 4’s. RIM CEOs have expressed that if Apple made some wrong decisions it needs to take the responsibility rather than looping in RIM and others. It has also affirmed that RIM BlackBerry smartphones do not require a case to preserve connectivity.

We had earlier reported on Apple introducing a dedicated antenna page on its official website which stated that many smartphones are facing similar antenna problems. It tested out a few smartphones including the BlackBerry Bold 9700, all of which it affirms faced similar issues to those of the iPhone 4.