The post-breakup period can be distressing enough without your ex putting up details about it on their Facebook profile, don’t you think? A new report from the University of Western Ontario in Canada claims that relationships among teens are becoming increasingly complicated thanks to social media.

Researcher Anabel Quan-Haase, noted that we all talk about how Twitter, Facebook and similar platforms play matchmakers without thinking too hard about the darker side of such websites. After speaking to 107 youngsters who had broken up with their partners, it was discovered that those who dump their significant other are less bothered by social media problems than those who’ve been on the receiving end of it. 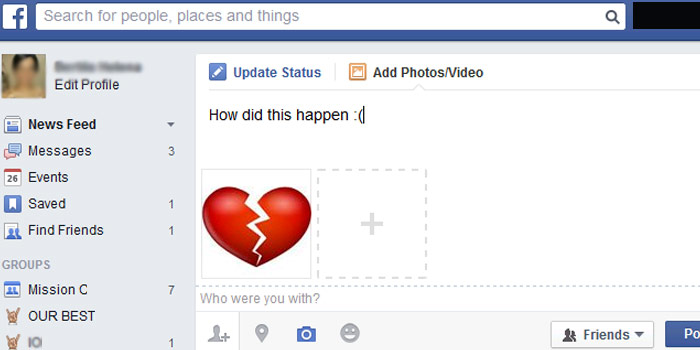 After a breakup, a large number of folks report analyzing messages and wall posts made by their ex all over again. Some take to stalking their lost love’s profile when unable to fight the bittersweet temptation of bringing up old memories. What makes it worse for a lot of people are the online reactions they get from friends and family members, after already suffering heartbreak.

It’s only human for social media users to adopt different behaviors when dealing with a breakup and it tends to hurt the most when both exes don’t share the same outlook. When one updates their relationship status or puts up personal details about the ordeal, the other feels they are flaunting their newly single situation. It’s best to either temporarily deactivate your account or unfollow your ex in case it gets overwhelming.

The University of Western Ontario’s findings on social media and post-breakup distress were shared at the recent 109th annual American Sociological Association meeting in Chicago.