Looks like the rumored Realme 6i is very close to hitting India, even as its Myanmar launch has been confirmed to take place on March 17. This information has come via the company’s Facebook page for the said country, which also states three vital specifications of the upcoming handset. One is the fact that it will have the MediaTek Helio G80 chipset at its heart, another is that it will support 18W fast charging out of the box and the most important one is that it will ship with a 48MP quad camera setup. There’s no word on what its price will be yet. 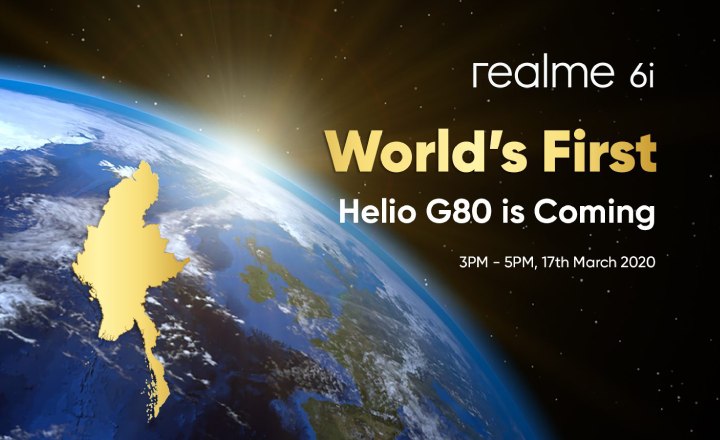 However, we can indeed make a guess, given the fact that it’s supposed to be a toned down version of the Realme 6 that was launched in India last week at a starting price of Rs 12,999. That device comes with the new MediaTek Helio G90T, and grabs an impressive array of other specifications. So we can certainly expect the Realme 6i to cost around Rs 9,999 or less.

The Helio G80 SoC that’s supposed to go inside it is a gaming focused chipset unveiled not too long ago. It features MediaTek’s HyperEngine technology that’s aimed at boosting your mobile gaming experience. As for its processor, it’s an octa-core assembly featuring two Cortex-A75 cores clocked at 2GHz and six Cortex-A55 cores clocked at 1.8GHz. The Facebook page of Realme Myanmar, which was brought to our attention by India Shopps, has also confirmed that the phone will ship with a 48MP quad camera setup and 18W fast charging support, which will be provided through a USB Type-C port.

In case you’re waiting for news regarding the Realme 6i’s release in India, it’s quite a few weeks away, but what’s certain is that it’s coming to Myanmar on March 17. This date is also when we’ll get a fair idea of what its price in India could be.