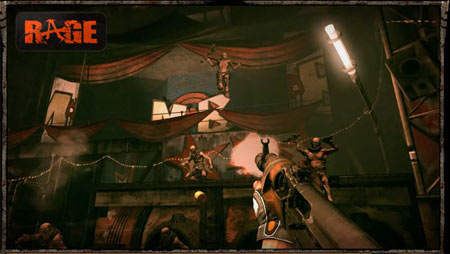 Games have been a hit with mobile enthusiasts as it offers them a perfect and fun way to pass time. According to Joystiq a new game from id Software entitled Rage, is going to hit the iPhone platform pretty soon. John Carmack, the co-founder of the company spoke about the game coming to iPhone at the annual QuakeCon in Dallas Texas.

Gaming aficionados can expect the title to come complete with features like 60 frames-per-second framerate and MegaTextures. An iPhone 4 demo of the game was also given at the conference. It can be played on both the iPhone 4 and 3GS. The website has spotted a Tweet from Carmack clearing the rumors related to the demo running on id tech5 engine. He stated, “The iPhone demo was not “idtech5″ on ios, it was from scratch new code. A tool in rage exported custom data for it.”

This new offering from id is an upcoming first person shooter and racing video game. This iPhone title is said to be a predecessor of the multi-platform game releasing next year. A second Rage title is anticipated to be released on the iPhone next year along with its console/PC launch. The current iPhone title will not require a four-year development cycle, hence is expected to be out this year itself. There is even a possibility of this title coming to the Android Market sometime soon.