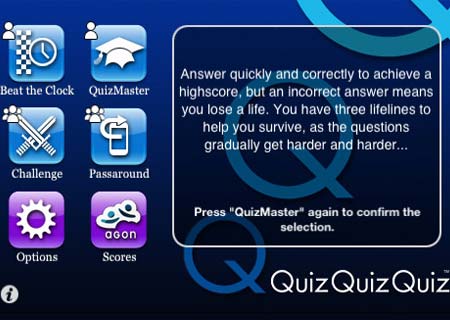 Mobile games are an amazing way of spending time whilst all those boring train or bus journeys to office. Apt in sharpening those gray cells, trivia quiz games have been quite a craze with several cohorts. QuizQuizQuiz afresh application has made its way to the App Store for iPhone users. It has been developed by Four Door Lemon and QuizQuizQuiz in collaboration with Daily App Dream.

This fully customizable game features question set in multiple languages offering hundreds of topic categories and a built-in achievement award system. It is loaded with 4,000 US specific questions and 3,500 for both Australia and New Zealand. Additionally, a plethora of trivia questions have been included in other languages.

The title is available in several languages including English, French, German, Italian and Spanish. The latest version of the game present in the App Store is 1.1. Sitting placidly in the games category, it requires 6MB of onboard memory to settle down in the iPhone. QuizQuizQuiz is compatible with all Apple handsets operating on iOS 2.2.1 or later. The company is offering the paid version of this title free of cost for a limited period of time, hence users can download it from the App Store.