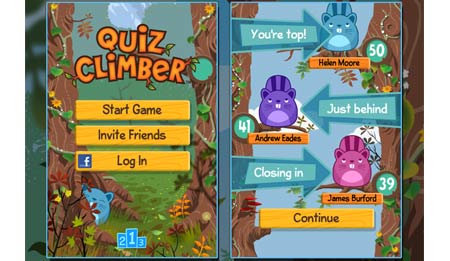 Through the Quiz Climber game, developed by Relentless Software, players can challenge their friends to test their knowledge. Players have to compete with other players to answer maximum number of questions correctly. The game supposedly contains exciting visuals and innumerable updated questions.

“We’ve distilled down 5 years at the top of trivia on console to make making Quiz Climber the best and most addictive social mobile trivia game in the world. It’s free and the perfect game to challenge your friends with. Enjoy” commented Andrew Eades, Chief Executive Officer and co-founder of Relentless Software.

In the game of Blobster, gamers have to fling a blob or amoeba to save the environment from a polluting company. Gamers have to travel through a colorful and hazardous world dotted with various hurdles using flick and tilt controls. There are numerous levels and power ups to cross and collect respectively in this new game.

Players have to take on the role of a doting parent bird that has to navigate through obstacles to feed worms its hungry chicks in the Hungry Chicks game. Featuring 36 levels of hurdles like electric fences and spikes, the game comes with cute characters and a summery soundtrack.

These games can be downloaded from the App Store. Hungry Chicks and Blobster games are available for a price of $0.99 and $1.99 for their HD version. The Quiz Climber game is available for free but its ad free version comes at a price of $1.99.