Home Apple Purchase one 32GB iPhone 4 at Best Buy, get the other one... 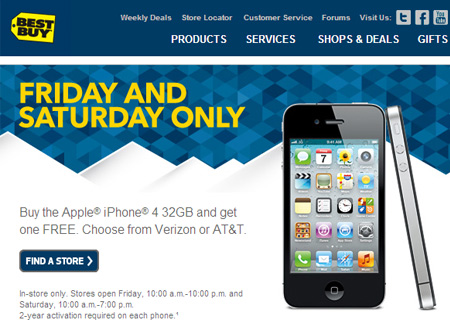 Probably hard to resist, a year-end sale is being offered by Best Buy wherein customers, on purchasing a 32GB iPhone 4, will be able to acquire a second one absolutely free of cost. This offer was however only extended over a period of two days namely Friday and Saturday. Those who have yearned for an affordable Apple device the whole year could fulfill their wish on the last day of 2011.

Subscribers of Verizon and AT&T do not need to shift loyalties as Best Buy is providing this deal for the Apple smartphone on both carriers. According to PocketNow, this offer could be a good option for those who wished to get a hold of the new iPhone 4S but found it to be too costly. This deal will allow users to gain two handsets as well as double the amount of storage for the same price of a single iPhone 4S unit. 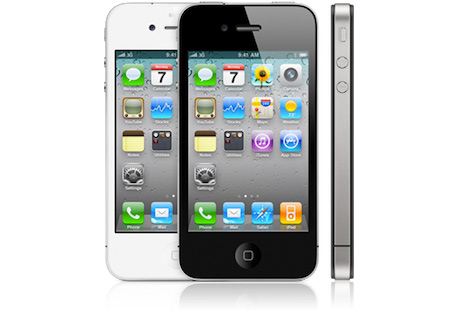 By now the world is quite familiar with the various features of the Apple mobile device. It comes embedded with a 3.5-inch widescreen multi-touch Retina display and supports connectivity options including Bluetooth 2.1, Wi-Fi 802.11b/g/n and 3G. The iPhone 4 also boasts of a VGA front facing snapper and a 5MP rear facing camera with LED flash, geotagging and 720p HD video recording capabilities at 30fps.

Interested parties can visit Best Buy stores and purchase the 32GB version of the iPhone 4 for a price of $200 along with a two-year contract. Although the second Apple smartphone comes without a price tag, a two-year contract has to be signed for it as well.