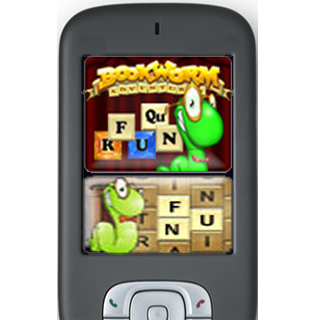 PopCap Games, a developer and publisher of casual games has launched a mobile game called Bookworm for a wide range of handsets in North America and United Kingdom. Bookworm is the second mobile game which was internally developed by Popcap Games. It is available from T-Mobile in UK and all major mobile carriers throughout North America.

This game was originally launched for Web and PC play in 2003, and the recipient of numerous awards. Ever since the game Bookworm has been launched on BlackBerry it has a great success.

Andrew Stein, director of mobile business development at PopCap commented, “Bookworm is very well suited for mobile phones because it can be played in short bursts of a minute or two whenever and wherever the opportunity arises.”

Bookworm players must build words from continuous letter tiles on a grid. Longer and more difficult words score more points and produce a variety of “gem tiles” that offer additional bonuses (and mega-bonuses when multiple gem tiles are used in a single word). Burning tiles sear through normal tiles, reaching the bottom of the grid more quickly; they must be used before they reach the bottom or the game ends. With the new mobile version, players have the option to control the selection of letter tiles via d-pad/cursor, triple-tap or predictive text entry, such that the game controls are streamlined specifically for on-the-go play.

Stein further continued, “At the same time, the game also offers a great challenge for marathon word-builders since it’s essentially infinite in its replayability. We’ve streamlined and optimized the controls so that playing Bookworm on a phone is even easier than via a mouse or keyboard. And the game now references the Oxford English Dictionary, so even the most inveterate ‘lexophile’ will be satisfied.”

Features of Bookworm Mobile are:

The game Bookworm is immediately available in North America and United Kingdom.