US space agency NASA’s New Horizons spacecraft’s latest flyby mission around the vicinity of Pluto shows its moon Charon to have been split open by what scientists think was an ancient frozen ocean underneath its surface. The composite picture posted below is a high resolution enhanced color view of the moon just before the vehicle’s closest approach to the planet on July 14 this year. The photo blends a series of images clicked by the Ralph/Multispectral Visual Imaging Camera (MVIC) mounted on the craft.

NASA says the stunning visuals of Pluto’s moon seem to unveil a complex and violent history. Charon’s face was expected to be covered by craters, just like on any other similar heavenly body. But its upper crust is dotted with canyons, hills, landslides and surface-color variations. One of the most prominent geological formations on it is a massive split that’s four times longer than the Grand Canyon which stretches for 446 kilometers. 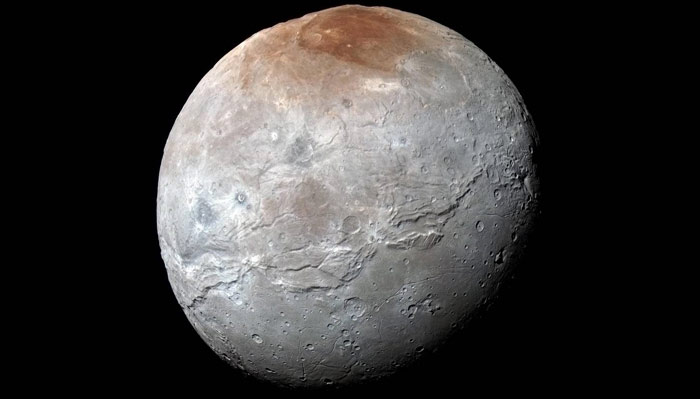 This intriguing tear on Charon’s crust displays a belt of fractures and canyons north of its equator. It goes on for more than 1600 kilometers. NASA’s scientists reckon cold volcanic activity known as cryovolcanism is behind the long and deep cut. An internal ocean composed of water could have frozen below the moon’s surface, causing the cracks on its face. It may have forced water-based lava to spout to the top.

Charon is part of a binary system along with Pluto. It is named as one of the dwarf planet’s moons which also cover Styx, Nix, Kerberos and Hydra. NASA will be releasing better images and composition data throughout the year as New Horizons transmits additional information.